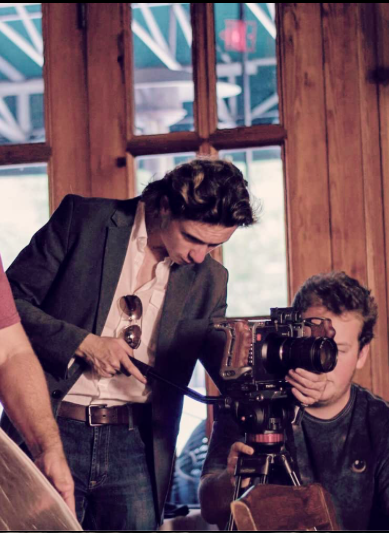 ndrew Di Pardo was born in Toronto, Ontario (Canada). As a young child, Andrew would spend countless hours watching 'behind the scenes' documentaries of his favorite movies in early preparation for his future career.

Writing was his strongest passion throughout his childhood and into his teenage years. It was an endeavor that lead him to not only have courage to pitch his series concept to a studio in Pittsburgh, but to forge his own path as a filmmaker by creating his own short films.

Early on in his independent film career, Andrew wore many hats on each production. He wrote, produced, Directed and acted throughout his first five years and even received a nomination for "Best Director" at a film festival in 2015. That same year, he graduated from the Toronto Film School and made his move from Canada to the United States Of America.

2016, Andrew was then granted the opportunity to be the Director and Director of Photography on a feature-length comedy titled "The Rush Chairman." The following year, that film (as well as two others) would be released.

2018, Andrew released what he considers to be his best short film to date in which he co-wrote & Directed titled "Decades Apart." The film was released on Amazon Prime and premiered at two film festivals (in the years to follow) where it was nominated for "Best Short Film" & "Best Director in a short narrative." In 2020, the films theatrical debut in Las Vegas was planned for April until COVID hit, halting those plans.  A year later, Di Pardo released a new alternative take on that same project which he titled "The Noir Cut" (available now on Amazon Prime).

Since 2020, Andrew Di Pardo has been actively working full-time in the Film industry for Disney.  His recent credits include a newly created position called a "Set Monitor" and a "Locations Assistant" on Televison Shows such as: "The Resident," "Just Beyond" & "Ordinary Joe."

Summer 2021 has seen his return to Directing with a new Documentary series titled "The Minds Eye" which has entered production across the southern states.

Andrew has a passion for the film industry that extends beyond being a Writer or Director, he just loves working on film sets in a variety of different positions.

The item was added to the cart